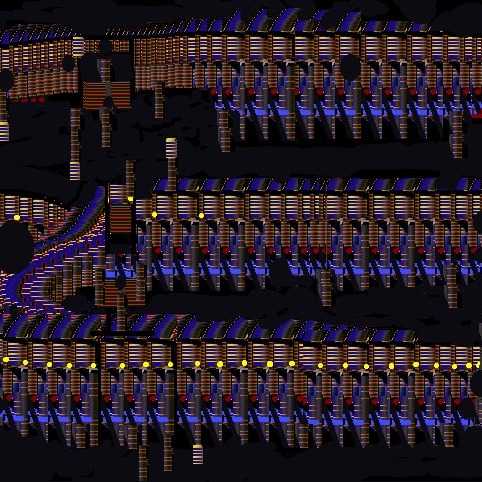 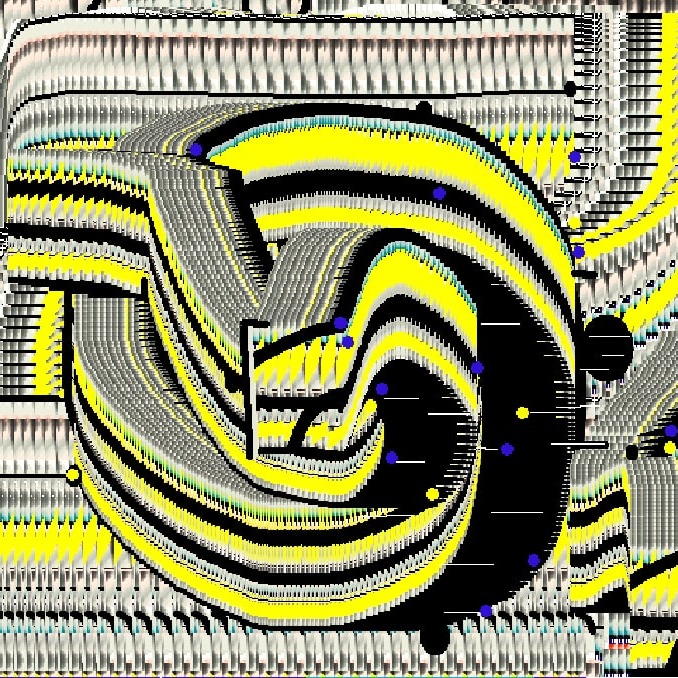 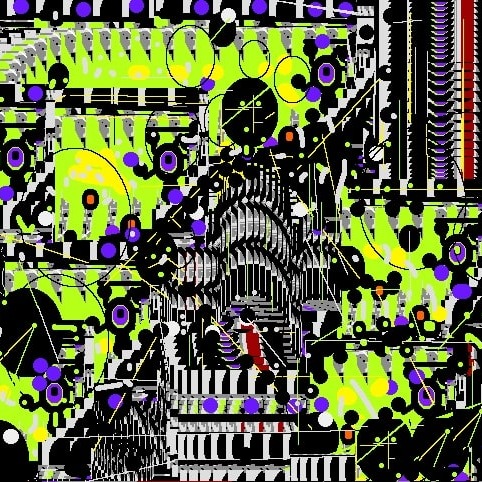 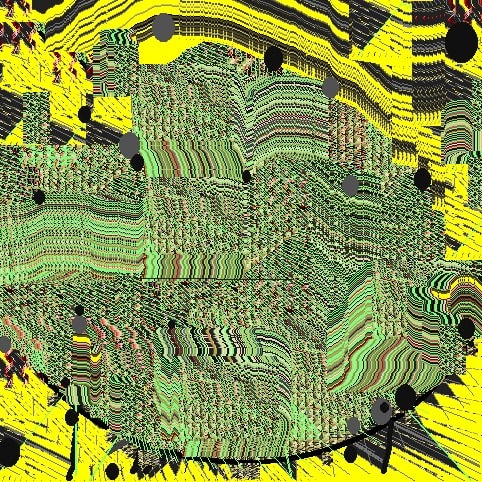 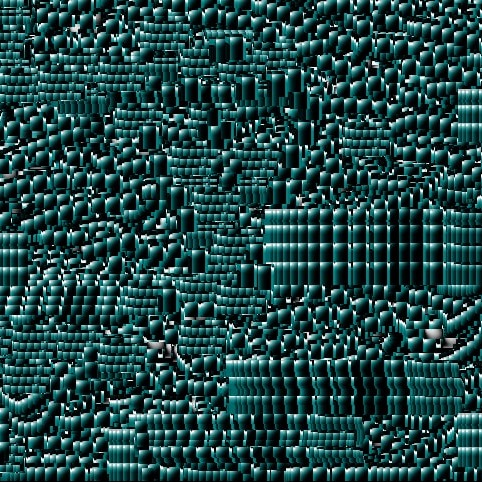 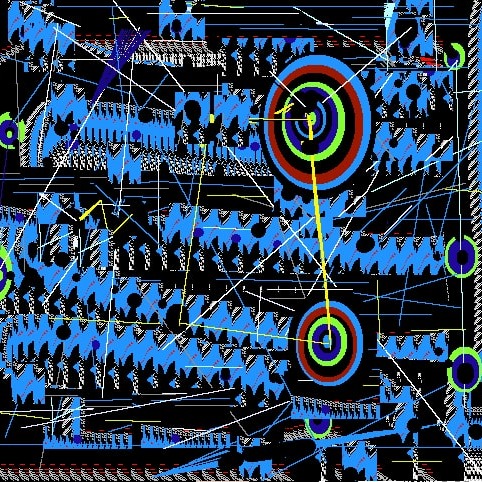 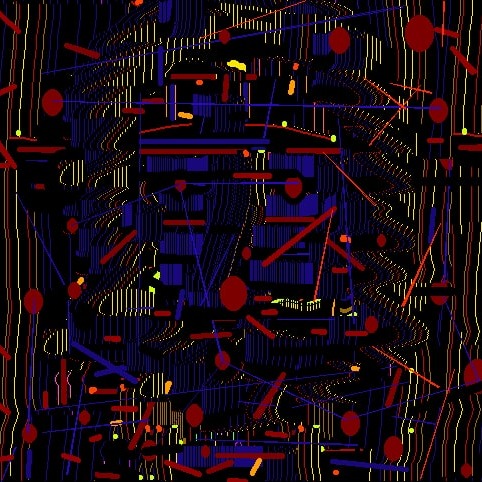 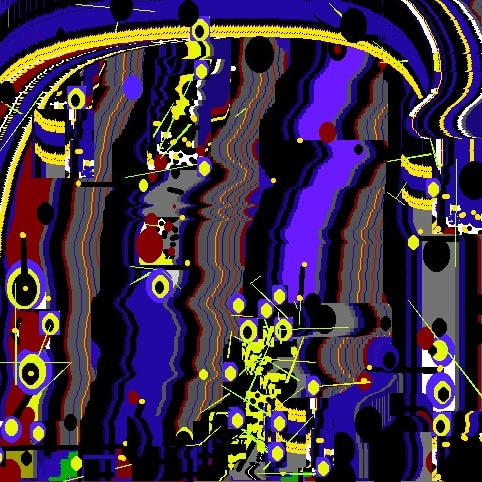 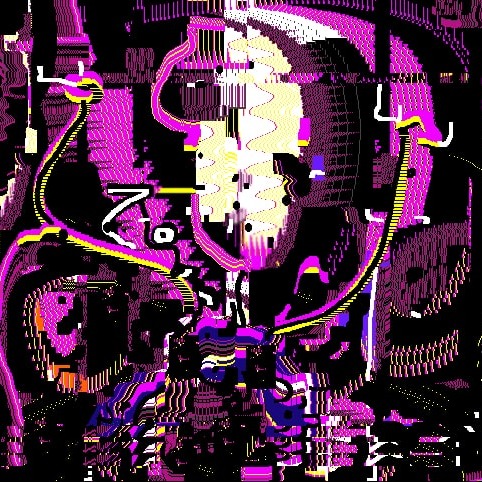 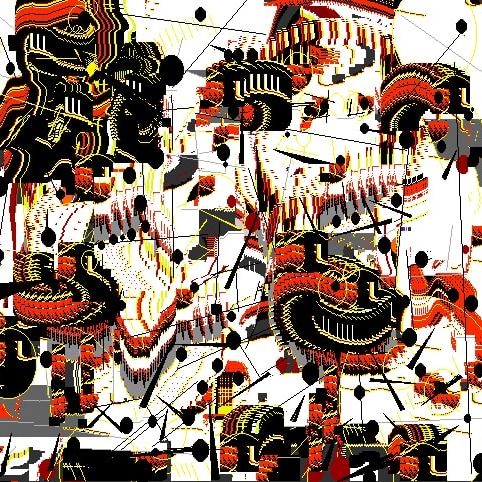 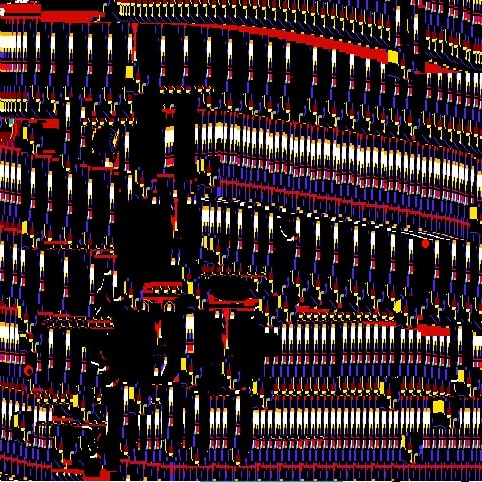 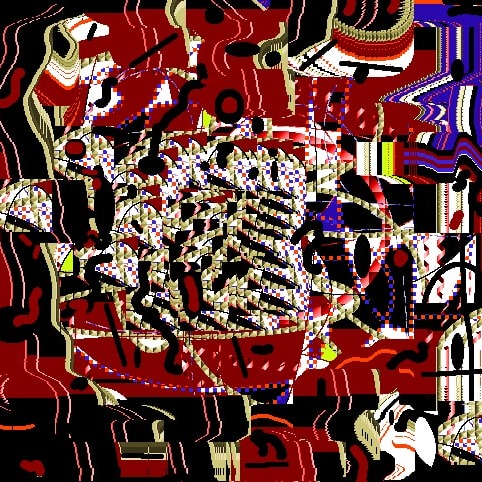 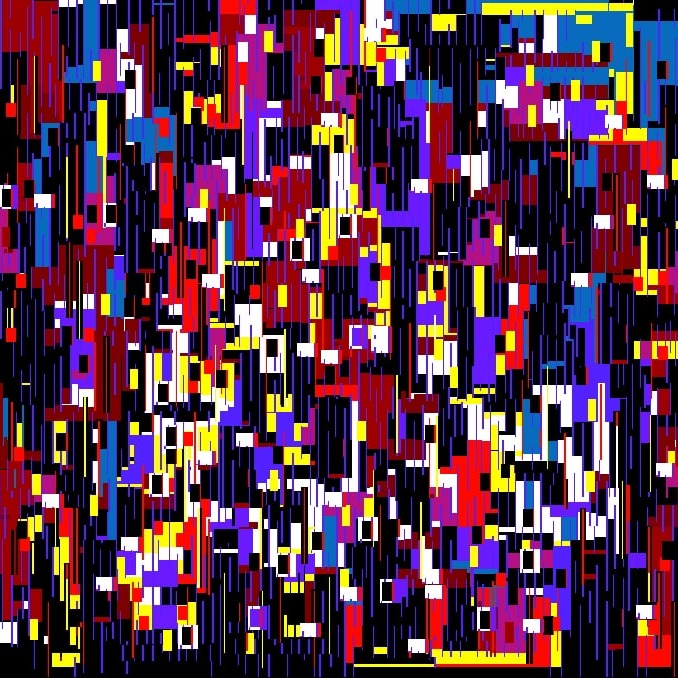 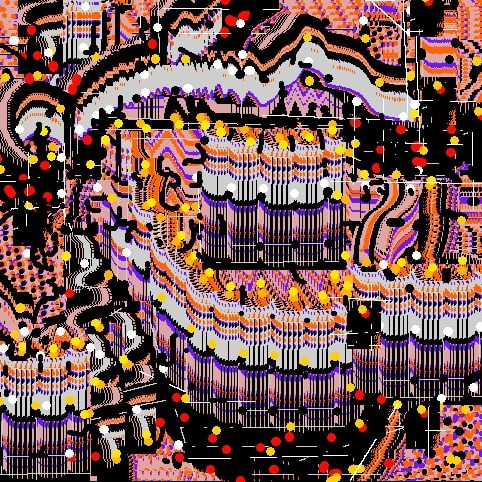 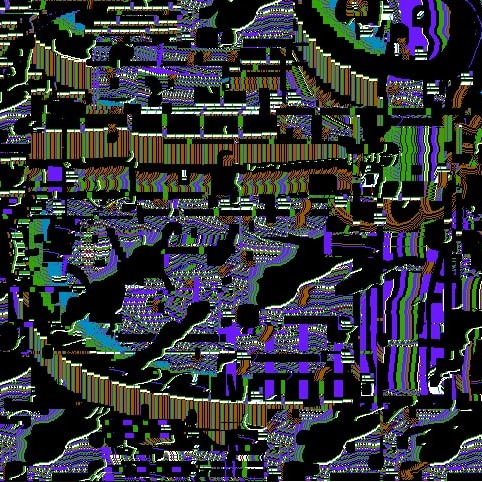 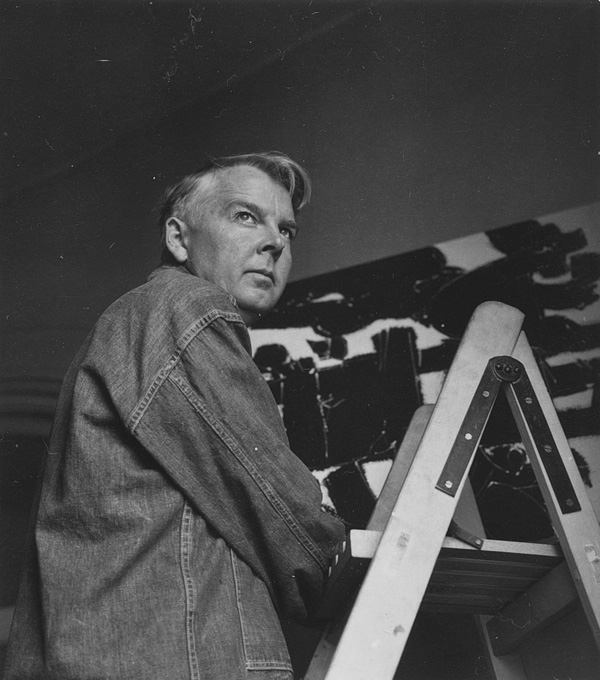 Lee Mullican was born in 1919 in Chickasha, Oklahoma and died in Los Angeles in 1998. Upon his graduation from the Kansas City Art Institute in 1942, Mullican was drafted into the army, serving four years as a topographical draughtsman before moving to San Francisco in 1946.

After winning a prestigious Guggenheim Fellowship in 1959, he spent a year painting in Rome before returning to Los Angeles where he joined the UCLA Art Department in 1961, keeping his position for nearly 30 years. He divided the later part of his life between his homes in Los Angeles and Taos, traveling internationally and co-organizing exhibitions at UCLA. A retrospective spanning fifty years of the artist’s work was organized by the Los Angeles County Museum of Art in 2005.

Marc Selwyn Fine Art has a diverse program which includes estates and established artists as well as mid career and emerging talent. The gallery takes an interdisciplinary approach and an international perspective, exhibiting artists from the United States and Europe working in photography, ceramics, installation, painting and other media.

The gallery has exhibited and represents important 20th Century photographers who are pioneers in their medium, including, Richard Misrach, Peter Hujar and William Wegman. Many of the gallery's more established artists working in painting, drawing and sculpture such as Mel Bochner, Barry Le Va, Allen Ruppersberg, and Michelle Stuart are characterized by a minimal or conceptual aesthetic, while exhibitions of younger artists have been more varied and experimental.

The gallery also has an active presence on the secondary market and often exhibits a selection of modern masters with an emphasis on works on paper, by such artists as Sol Lewitt, Agnes Martin and Robert Mangold. In February 2014, Marc Selwyn Fine Art relocated to a newly renovated space in Beverly Hills.

In the mid-1980s, Lee Mullican, an American painter, brought art and technology one step closer together through his pioneering digital works. For the artist, the parallels between working physically and digitally were apparent, “I examined why I thought the computer was for me. Even in my paintings, I was always working with pattern and line, and color. I’ve had a built-in computer ever since I’ve been doing art.”

Over the past decades, technology evolved from being a tool to a medium, to finally becoming the artwork itself. Today, digital art no longer needs to justify why it should be art. Artists recognize the possibilities of technology and collectors understand the mastery and conceptual thinking that underpins the art. From digital paintings and digital photo manipulation to AI, creative algorithms, and 3D modeling, the digital art space is bigger than ever before. We’re now in a world where the code is the work, as demonstrated by the explosive growth of generative art where lines of code written by the artist create the image. The explosive growth of the NFT art market, from $20 million in 2020 to $2 billion in 2021, was a catalyst for widespread engagement with digital art.

The unbounded creativity of digital art today was made possible by the artists who dared to take the first step. Artists who saw beyond the functional aspects of technology and harnessed it to create art. Artists of the 60s, 70s, and 80s paved the way by believing digital art could be the future before it was even accepted by the art world, let alone the general public.

Lee Mullican (1919-1998) was one of these pioneering artists. Primarily a painter, Mullican embraced the possibilities offered by emerging digital technologies of the time. At the age of 67, Mullican began working with UCLA’s Program for Technology in the Arts to explore how his signature painting style could be translated to the digital realm. The resulting works seem to pulsate on the screen. The interplay of rich, jeweled colors and dark backgrounds along with the repetitive patterns encourage us to look and look again. Thirty years after their creation, they still have the power to mesmerize.

Today, for the first time, the world has the opportunity to own a piece of digital art history as Mullican’s digital works are being offered as NFTs. In an exclusive partnership with the Estate of Lee Mullican and Marc Selwyn Fine Art, Verisart is delighted to present 15 NFTs by the artist. All the works are certified NFTs minted on Verisart, an independent NFT minting and blockchain certification platform. The auction runs from November 20 to December 4.

During Lee Mullican’s six-decade-long career, the artist was never afraid to experiment, explore and push boundaries. He was interested in abstraction when the Realist aesthetic was still dominant, he invented a divergent vein of Surrealism and embraced digital technology.

As a painter, Mullican developed his own meditative process of painting which he called “striation”, a rhythmic and repetitive pressing of a palette knife against the canvas. Shortly after developing his style, Mullican formed a collective with Wolfgang Paalen and Gordon Onslow Ford. They named their group, ‘DYN’ after the Greek word for “the possible”.

DYN explored the subconscious mind, mysticism, automatism, and the influences of ancient cultures, themes which echo throughout Mullican’s works, including in his digital creations. Mullican said of the group, “We were dealing with art as a way of meditation.” These words apply to his digital works too, stare long enough at the swirling pixels and the experience becomes meditative.

When Mullican began working with digital imaging technology, the integration of color had only recently been introduced thanks to IBM’s introduction of a 16-color scheme (four bits—one bit each for red, green, blue, and intensity) with the Color Graphics Adapter (CGA) and for its first IBM PC in 1981 and then improved with the Enhanced Graphics Adapter (EGA) in 1984.

Mullican created his works on the IBM 5170, equipped with the Truevision Advanced Raster Graphics Adapter (TARGA), and using a Summagraphics Summasketch stylus to experiment with painting and drawing on a computer. The artist was excited by the possibilities offered by working on a computer, “Imagine being able to paint in sweeping gestures with a pattern, throwing out thousands of dots and blots of color that could be cured or erased or changed or kept on a disk to be brought back for further change in an instant or in a matter of weeks or years.” That we now take such abilities for granted, highlights the creative possibilities unlocked by technological progress.

Mullican, like many contemporary digital artists who embrace glitches produced by computer programs, recognized the element of unpredictably that existed in digital art, “I found that beyond what one thought, the computer as being hard-lined, analytical, and predictable, it was indeed a medium fueled with the automatic, enabled by chance, and accident, discovery of new ways of making imagery.”

In total, Mullican created over 300 images saved as .TGA and .PCX files stored on floppy disks. The TARGA generated files were the native format for VISTA boards, the first graphic cards for IBM-compatible PCs to support Highcolor/TrueColor display, meaning that computers today still support the artwork’s native file format. The original TGA works will be available to the NFT collectors through unlockable content included on the NFT’s Verisart blockchain Certificate of Authenticity.

A meeting of analog and digital

Lee Mullican’s digital works will be projected onto walls alongside his canvas paintings from 1966-1985, as part of Computer Joy, an exhibition organized by Marc Selwyn Fine Art Gallery.  The exhibition offers viewers the opportunity to see the works side by side, emphasizing the dialogue between Mullican’s physical and digital works.

This NFT collection, created as a continuation of Lee Mullican’s innovation and enthusiasm for the digital medium, will bring a wider audience to the artist’s experimental works and provide collectors with the opportunity to own images which brought art and technology closer together.

Bidding on OpenSea ends on December 4 - Explore the collection.

Join the Verisart Discord to learn more about the artist and his works.